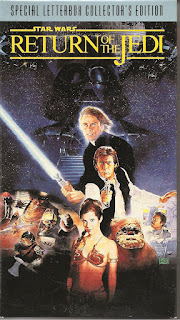 Star Wars Movie #3 (Please click the link to read my review of Star Trek III: The Search for Spock)


Synopsis: Teddy bears save the day!


Blurb From the VHS Jacket: "The Empire is brought to its knees!"


You Might Like This Movie If: You find that Jabba the Hutt strangely reminds of you of a once-famous celebrity.


Really?: 1) See “Synopsis”. 2) General Solo? General Calrissian? Have either of these rogues ever attended officer training school? Is the Rebellion handing out commissions like balloons at a birthday party? 3) A second Death Star with the exact same weakness as the first...gee, that’s original. 4) So wait...Luke is told he has a twin sister, and he automatically assumes it’s the only girl he apparently knows? And he’s correct?!?! 5) Come to think of it, if Leia has “always known”...why did she kiss Luke on the lips in both Star Wars and Empire? 6) Um...would anyone seriously bring a shiny gold robot with limited mobility or a compact droid that operates on wheels on a commando mission in thick forest? 7) Is it just me, or did the carbon freezing cause Han to lose about 20 IQ points? He seems more like a loveable fuckup in this film than the super-cool scoundrel of Star Wars and Empire. 8) Gee... that Imperial fleet isn't much of a threat, is it?


Rating: If The Empire Strikes Back is the best of the Star Wars movies, Return of the Jedi is definitely the weakest of the original trilogy, and the point at which the franchise started to tumble downhill. While I’m not crazy about the Ewoks, or the cartoony-action scenes of the Battle for Endor, the biggest problem with Jedi is that there’s TOO MUCH STUFF. The scenes in Jabba’s lair/sand barge have nothing to do with the rest of the film (aside from freeing Han, of course), and the last 45 minutes is a non-stop, three-ring circus of space battles, forest explosions, and a lightsaber duel. By the end, I was just tired. 6.5/10 stars.