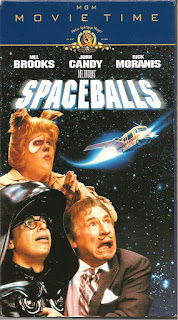 
Blurb From the VHS Jacket: "The farce will be with you in this outrageously hilarious sendup of epic sci-fi movies, created by comic genius Mel Brooks."


What Did I Learn?: The phrase “May the Schwartz be with you” isn’t funny, even the first time.


Really?: Spaceballs is a very silly comedy, so it might not be entirely fair to judge the film on the basis of credibility, but I do have a major complaint. The Spaceballs arrive at Planet Druidia in order to kidnap Princess Vespa (how, exactly, they're going to get through the planet's force shield is never explained), and then the Princess - totally on her own - flees from her wedding and flies into space, very close to the Spaceball attack ship. Did the film go through a major re-write or two, and Brooks simply didn't bother to fix such an incredible coincidence? As it stands, this part of the film reflects incredibly lazy writing.


Rating: Spaceballs certainly has its moments of hilarity, especially when Rick Moranis is on-screen as the not-so-scary Dark Helmet, and hey - it's a pleasure to see the late, great John Candy in action. Unfortunately, like most of Mel Brooks' other films, Spaceballs is also dopey, juvenile, extremely obvious, and not terribly funny. I'm barely recommending this movie based solely on a few good laughs (emphasis on "few"), and the fact that I've always liked Daphne Zuniga... I wonder what she's up to these days...? 5.5/10 stars.