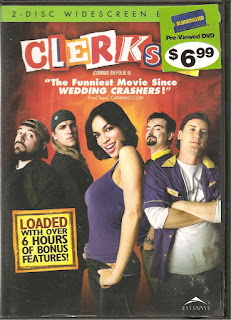 Synopsis: Anyone remember The Trailer Park Boys?  Remember how funny it was in the early years? Remember how it jumped the shark when the cast members suddenly tried way too hard to be funny, and the storylines required the audience to laugh with Ricky and the boys instead of at them? Yeah... Clerks II feels a bit like those later seasons.


Blurb From the DVD Jacket: "Writer-director Kevin Smith returns to the scene of his cult comedy classic Clerks to pick up his... [text blocked by a huge UPC code sticker I can't remove] ... style of humour... and push it right over the edge!"


What Did I Learn?: 1) Folks in the bestiality business prefer the term "inter-species erotica." 2) It's not a good idea to go ass-to-mouth.


You Might Like This Movie If: You're glad this is a work of fiction, and you know the fast-food industry is safe and professional.


Really?: 1) I had a hard time believing Randal would stay employed at Mooby's for more than a day or so. And any other fast-food joint would have immediately fired his ass after he listed off a variety of racial slurs. 2) Wow...once again, Dante has two - count'em - two attractive, college-educated (and in one case, extremely wealthy) women chasing after him. Not only is he depressed and working a minimum-wage job as in Clerks, but he's now 12 years older and overweight. 3) Um...was there a point to including a montage of Randal and Dante riding Go-Karts to "Raindrops Keep Falling on My Head?"


Rating: Clerks II isn't really as bad as the last couple of seasons of The Trailer Park Boys, but it is a bit of a letdown after the brilliance of the original movie. While Clerks was all about clever writing and observational humour, Clerks II is more plot-driven, and artificial; the Elias character seemed phony, while Becky (Rosario Dawson) didn't exactly fit into the "askewniverse" established in the first film. Clerks II delivers some solid laughs, although it takes awhile for the story to get going, and I couldn't shake a sense of "Do I really want to see this?" Dante and Randal complaining about the ups and downs of working in a convenience store is funny when they're 22; at 34, it's more than a bit depressing. 7/10 stars.