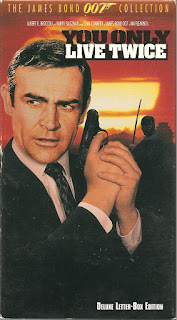 Connery-Lazenby James Bond Movie #7 (Please click the links to read my reviews of Dr. No, From Russia With Love, Goldfinger, Thunderball, Never Say Never Again, and On Her Majesty’s Secret Service)


Synopsis:  It’s like an Austin Powers movie without the jokes.


Blurb From the VHS Jacket: "A disaster in space pushes humankind toward World War III... and only Agent 007 can prevent it!"


What Did I Learn?: No astronaut would ever board a space capsule carrying his own air conditioner! Smooth move, Bond.


Really?: 1) So, the head of Japanese Intelligence has a private train underneath Tokyo, and he personally goes on commando missions with his elite team of ninjas(!!)? 2) What, exactly is the point of making James Bond “Japanese”, when he could have simply swam over to the mysterious island without living in the fishing village? 3) Um, does anyone think Bond looks Japanese? I’d say he resembles a young Burt Reynolds playing a Romulan. And why in the world do Bond and Tanaka continue with that ridiculous sub-plot when SPECTRE obviously knows his identity, because they keep attempting to kill him?  4) Um...what happened to the astronauts that Bond frees? 5) Doesn’t Osato realize Bond is within earshot when he orders Helga Brandt to have him killed? 6) Wait – Brandt has Bond right where she wants him; she could torture him until he tells her everything, yet she unties him, bangs him, and then attempts to kill him by bailing out of an airplane? WTF? 7) Oh, what’s the use...?


Rating: You Only Live Twice starts out relatively well, with the assassination of Henderson and a clever ruse by Bond, but it gets stupid and outlandish pretty quickly in the second and third acts. Connery was starting to get tired of the 007 franchise when he made this film, and you can tell he’s not terribly enthusiastic. I'm only barely recommending YOLT. 5.5/10 stars.
http://www.imdb.com/title/tt0062512/
Posted by Eli Schuster at 5:18 PM