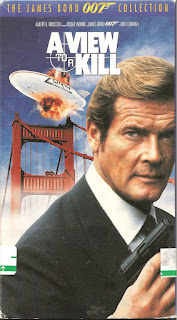 Moore-Dalton James Bond Movie #6 (Yes, I know that Octopussy should be the next in line. Alas, my VHS copy of that film is toast. I will attempt to review it at some point in the future)


Synopsis: Elderly British spy gets raped by Grace Jones. [Oh Roger, why did you agree to make this movie?]


Blurb From the VHS Jacket: “Agent 007 must save millions of lives in this crackling dynamo of an adventure, jam-packed with the most spectacular action sequences ever filmed, With wit, elegance and style, Roger Moore lends lethal charm to his final performance as James Bond.”


What Did I Learn?: If you're planning a major caper, you might want to put off machine-gunning all of your co-conspirators until after it goes off without a hitch.


You Might Like This Movie If: You have a thing for gadgets...and getting man-handled by scary-looking chicks.


Really?: 1) Wow...for a billionaire who should know better, Zorin seems to do a lot of his own dirty-work. And he sure has a knack for showing up at just the right time. 2) So wait, the horsey-set stuff at the beginning has nothing to do with the main plot - which seems suspiciously like a remake of Goldfinger, by the way. 3) Hmm... the KGB gives up rather easily, doesn't it? 4) Somebody actually wrote the following lines: May Day: 'Wow! What a view!', Zorin: 'To a kill!' 5) So, is it possible to drive the front-end of a car after it's been severed from its rear? That seems a wee bit implausible. 6) Did I miss something - does Bond ever once re-load that shotgun? 7) Hold on - May Day (Jones) is standing next to Sir Godfrey's car one minute, and she somehow disappears the next. Wouldn't any normal person look INSIDE THE CAR?


Rating: Roger Moore has said that A View to a Kill was his least favourite Bond movie; he didn't like the gratuitous violence of Zorin (Christopher Walken) shooting his own men, and he didn't get along well with Jones. Everything about this film is wrong, starting with the ill-considered use of a Beach Boys song during a ski chase. Moore does his best with the terrible dialogue, but at 57, he's too damned old to be swigging vodka martinis, bedding 25-year old girls and jumping around the Golden Gate Bridge. Oh, and Tanya Roberts is just awful as Moore's far-too-young love interest. Still, kudos to Walken for a nice performance, and to Duran Duran for a kick-ass opening theme song. 4.5/10 stars.

Would It Work For a Bad Movie Night?: Take a drink every time Tanya Roberts screams, or finds herself hanging from a ledge.