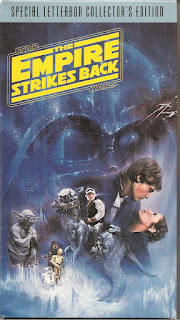 Star Wars Movie #2 (Please click the link to read my review of Star Trek II: The Wrath of Khan)

May the 4th be with you!


Synopsis: How Vader Got His Groove Back.


Blurb From the VHS Jacket: "The Battle continues..."


What Did I Learn?: 1) Princess Leia is not a committee. 2) Admiral Ozzel is as clumsy as he is stupid. 3) The possibility of successfully navigating an asteroid field is approximately 3,720 to 1. 4) Wars not make one great. 5) There is no “try”. 6) There is no “why”, either. 7) Darth Vader is Luke’s... now what was that big revelation, again?


You Might Like This Movie If: You think Billy Dee Williams is the coolest guy on the planet - any planet!


Really?: 1) So wait – Chewbacca starts pushing stormtroopers off the carbon-freezing platform and Vader prevents Boba Fett from shooting him? Come on... 2) Um...just how much time does Luke spend on Dagobah - a few days? I find it difficult to believe he could receive very much Jedi training from Yoda. 3) Hold on... Boba Fett is this amazing, scary bounty hunter with a zillion different weapons and then...he doesn’t really do anything? 4) Am I the only one who thinks Yoda sounds more than a bit like Grover?


Rating: The Empire Strikes Back is both a timeless classic, and easily the best of the six Star Wars films. Empire has it all: comedy, action, suspense, incredible music, and even a nice touch of romance (Carrie Fisher and Harrison Ford obviously developed some better chemistry in the three years since Star Wars). And yes, even 33 years after watching Empire for the first time, I still get bummed out at the point when Han Solo is frozen in carbonite. Highly recommended. 10/10 stars.