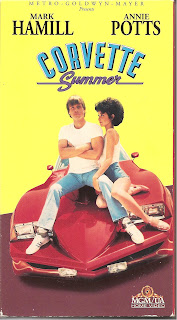 Return of the Jedi was released 30 years ago this month, and I’m reviewing a Mark Hamill movie... could it be that Schuster at the Movies is finally getting around to reviewing the you-know-what trilogy?


(A bit of useless trivia: this film features both Annie Potts and the late Eugene Roche, who respectively played recurring characters Tracy Spencer and Luther H. Gillis on Magnum PI. Both of them drove Tom Selleck’s famous detective a little bit batty every time they showed up)


Blurb From the VHS Jacket: "Mark Hamill and a red 'vette - a hot star and a hot car!"


What Did I Learn?: It’s difficult to apologize to your new co-worker for attacking him with a heavy chain the night before and somehow make it sound sincere.


You Might Like This Movie If: You've always wanted to see Mark Hamill's early work. [Holy crap - it's The Cos!]


Really?: 1) A Right-hand drive? Why in the world would anyone in North America build a right-hand drive sports car? 2) The hooker with a heart of gold... is there a reason why Vanessa (Potts) is so darned nice to Ken (Hamill), even to the point of insisting he sleep with her? Come to think of it, is there a reason he resists her charms, at first? 3) Wait – gas station dude knows Ken is sleeping in a U-Haul on his lot, and doesn’t kick him out? 4) Was it easy to get a job in late-70s Vegas without references?


Rating: If you were a teenager in the summer of 1978 (I was six, and more into The Muppet Show), you might appreciate Corvette Summer, but it’s about as dopey as an episode of Welcome Back Kotter, and I can’t say that it’s a particularly good movie. Sure, Corvette Summer has its moments (including a pretty good chase scene near the end), and Potts and Hamill enjoy some nice chemistry (even if Hamill has a tendency to over-act, and his character often seems like a weirdo), but one viewing is enough for me. I cannot recommend this movie. 5/10 stars.


Would it Work for a Bad Movie Night?: Maybe. Interestingly, a few scenes sort of mirror, or foreshadow a number of Luke Skywalker moments from the Star Wars movies, including a very brief flirtation with the Dark Side.