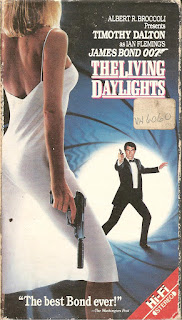 
Blurb From the VHS Jacket: “There’s a new James Bond.  He’s handsome, softspoken, Timothy Dalton, and he’s absolutely fantastic! As agent 007, he picks his way through a maze of death, deceit and treachery that stretches from the Rock of Gibraltar to the wilds of Afghanistan. ”


What Did I Learn?: Apparently, a cello case makes an excellent toboggan...why, it's so fast you can even outrun snowmobiles and professional skiers.


Really?: 1) Wasn't Bond awarded the Order of Lenin in A View to a Kill? Mightn't he have mentioned that after getting arrested by Soviet troops? 2) So, there are good Soviet officials, like General Gogol, and General Pushkin, and bad Soviets like General Koskov, and the entire Russian army in Afghanistan...I'm not sure I get the distinction. 3) I'm pretty sure that Connery's Bond would never go back for the cello. 4) So, the Afghan Mujahedeen had bottles of Russian vodka laying around, and didn't object to Western women walking around their camp without a head-covering? 5) Hmm... so, Whitaker and Koskov decide to kill another British agent, and they just happen to pick Saunders in Vienna, at just the same time Bond is visiting with him? That's a coinky-dink.


Rating: I hadn't seen The Living Daylights for a number of years, so I had forgotten that it's one of the better Bond films. Timothy Dalton is decent in his first outing as 007, the special effects and action sequences are legitimately exciting, and he enjoys some noticeable chemistry with Maryam d'Abo as Kara. The Living Daylights is a good movie that's marred by a few problems: 1) assisting the Mujahedeen made sense in 1987, but it seems like a hopelessly dated idea in our post 9/11 world, 2) we're never entirely sure what the villains want (they're gun-runners...no, they're drug-smugglers...no, they want the British Secret Service to assassinate the head of the KGB), and 3) the ending is really lackluster. 7/10 stars.