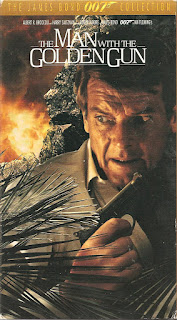 
Blurb From the VHS Jacket: "James Bond has been marked for death, and he'll need all of this lethal instincts and seductive charm to survive this action-packed adventure!"


What Did I Learn?: Solar energy is nothing but trouble....let’s stick with safe, dependable, ever-lasting oil.


Really?: 1) So wait – Bond is armed, while Scaramanga isn’t, so why does Bond just stand there impassively as Scaramanga destroys his seaplane with that solar gun-thingee?  2) Wow...so, 007’s search for the missing solar energy expert is linked to Scaramanga? That’s quite a coinky-dink...and who would have guessed that such a money-hungry assassin would be such an energy conservation nut? 3) Funny how Bond’s reputation precedes him everywhere he goes...I can’t imagine that would be helpful for a secret agent. 4) Did I miss something – who are those thugs who attempt to beat up Bond in Beirut?  5) Oh God...they brought back Sheriff Pepper from Live and Let Die... 6) So, Scaramanga has one guy - one guy - who runs the solar energy plant? I guess Broccoli and Saltzman didn't want to hire a whole bunch of extras.


Rating: Like many Bond films, The Man With the Golden Gun starts out well, and then gets bogged down in bad comedy and ridiculous plot twists. While I enjoyed Christopher Lee’s top-notch portrayal of the cold-blooded Scaramanga, the movie takes a decidedly wrong turn when Bond wakes up at the karate dojo (and gets rescued by a couple of schoolgirls), the solar energy sub-plot seems tacked on, and it takes forever for the final Bond-Scaramanga showdown to take place, and when it finally occurs, it’s a let-down. I cannot recommend this movie. 5/10 stars.


Would It Work For a Bad Movie Night?: Take a drink every time Roger Moore raises an eyebrow.