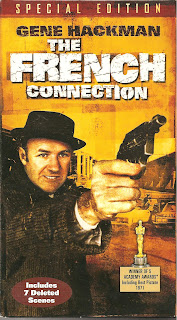 Synopsis: It's basically 104 minutes of extremely tired cops sitting around on stakeouts, waiting for something to happen.


What Did I Learn?: If you're going to search a car for drugs, start with the rocker panels first.


You Might Like This Movie If: You think Gene Hackman and Ed O'Neill from Married With Children are pretty much inter-changeable.


Really?: 1) Holy shit, doesn’t anyone in this movie ever sleep? 2) I had a great deal of trouble believing “Popeye” Doyle could run all the way up to the top of his apartment building, see the sniper running away from him at ground level, and then not only manage to catch up to him, but continue the chase, even though he must be completely exhausted at that point. 3) Um...is it possible to rip a Buick to shreds, and then somehow put it back together in a few hours, good as new?

Rating: The French Connection is a gripping and gritty police procedural featuring an outstanding performance from Hackman as “Popeye” Doyle. While the film is best remembered for a spectacular car-and-subway chase, my favourite element of The French Connection is that it’s possible to get a sense of the look and feel of New York city in the early 1970s from so many on-location shots. Highly recommended. 10/10 stars.