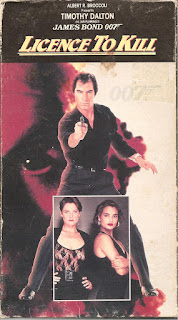 Moore-Dalton James Bond Movie #8 (Hmm...this would have worked for the "Revenge" theme I did, late last year).


Blurb From the VHS Jacket: "When Bond wants revenge, nothing stands in his way. Not even Her Majesty's Secret Service!"


What Did I Learn?: You can't hit anything with either an Uzi submachine gun, or a stinger missile at near-point-blank range.


You Might Like This Movie If: You know that cocaine is bad news - and you want to see somebody famous get really angry.


Really?: 1) Ooh...a shark tank! Hey, hey, didn't we see one of those in Thunderball, You Only Live Twice (albeit with piranhas), Live and Let Die, The Spy Who Loved Me, and For Your Eyes Only? 2) So wait - Sanchez escapes in broad daylight, the same day that Felix ties the knot, and...nobody informs him about it? Wouldn't a daring escape like that be front-page news? 3) Wow...Felix is awfully chipper at the end of the movie, considering his legs were eaten by a shark and his wife is dead. 4) So wait - Bond is a rogue agent, and yet Q shows up with a bag of goodies? 4b) Funny how Bond loses his license to kill, and yet...nothing is ever done with that plot point. 5) So, what exactly is the deal Sanchez proposes to the Asian drug lords... is he just selling them large quantities of cocaine? That's never really made clear.


Rating: Licence to Kill isn't nearly as awful as I remember it to have been (how's that for high praise?), but it certainly isn't one of the better Bond movies, either. While some sort of correction was in order after the Roger Moore years, Licence is pretty much humourless (Wayne Newton's appearance as a new-age televangelist isn't funny - just dumb), and chock-full of brutal violence. In spite of this the movie strangely looks and feels like it was made for TV, with cheap-looking sets and dull action sequences. I cannot recommend this movie. 5/10 stars.

Would it Work For a Bad Movie Night?: Take a drink every time Bond instructs Pam and Q to leave town, and neither of them take his advice.