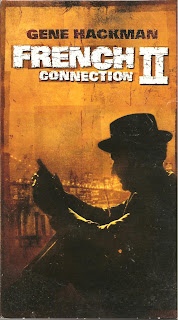 
What Did I Learn?: The South of France is a dangerous, drug-infested hellhole – stay away!


You Might Like This Movie If: You want to see a tough, New York cop slowly kill himself by ingesting garbage.


Really?: 1) So wait – Doyle torches a building, and then beats the crap out of a suspect, and he doesn’t face criminal charges? (I don’t like to give away spoilers, so I’m not going to mention a similar event right at the end of the film). 2) I realize Doyle’s superiors are setting him up (it’s never made entirely clear if they’re trying to get him killed, or just using him to flush out Charnier), but how in the world can they send him on a paid, open-ended assignment in Marseilles when New York was in the midst of a budget crisis in the mid-1970s? 3) Up until Doyle's capture, he's done absolutely zero damage to Charnier's drug empire in Marseilles; I had a bit of a hard time believing they would feel the need to take him prisoner and turn him into a smackhead. And why return Doyle to the police when they could put a bullet in his head and dump him into the harbour?


Rating: The French Connection II is a good film that doesn’t exactly compare with the far-superior original. While Hackman displays some incredible acting talent (especially when Doyle is forced to quit heroin, cold turkey), the film could have used Roy Scheider’s Buddy Russo character, and I didn’t exactly buy the basic premise of the movie (see "Really?"). I also found myself asking the same question I asked during Robin and Marian: do I really want to see this? Do I really want to see a tough New York cop reduced to a sobbing, pathetic junkie for about half an hour? The French Connection is a compelling police procedural that evokes a long-gone time and place; in contrast, The French Connection II looks and feels like an enjoyable, but somewhat unnecessary sequel. 7/10 stars.