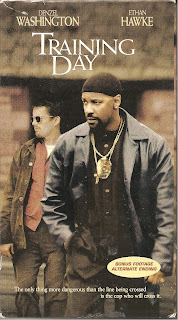 
Blurb From the VHS Jacket: “In a powerful departure from his frequent good-guy roles, Denzel Washington plays the fiercely charismatic Alonzo Harris. Cruising the ‘hood in his flashy low-rider G-ride, laying down the patter of his twisted crimefighting logic, Harris both attracts and repels as he becomes the kind of thug he’s supposed to collar.”


What Did I Learn?: If your new boss asks you to smoke something, don't. Just don't.


You Might Like This Movie If: You’ve always wanted to see Denzel play a Wayne Brady character.


Really?: 1) So wait...Ethan Hawke gets the crap kicked out of him (twice) earlier in the day, takes a beating from Denzel, falls on the hood of a car, and he’s still able to get the drop on his (presumably) tougher partner? 2) Most honest cops would have walked away after Denzel used a phony search warrant to rip off a poor family. 3) I realize Denzel’s character needs some fast cash, but come on...he allows a rookie he doesn’t even know to witness him commit a murder, several armed robberies, assault and battery, a home invasion with phony documents and attempted bribery all on the guy’s first day!


Rating: Denzel Washington delivers a stellar performance as one of the scummiest cops to ever (dis)grace the silver screen, which is why I’m giving this film 6.5, instead of 6 stars. Training Day is a fun movie, yet it becomes increasingly difficult to suspend one’s sense of disbelief as it progresses. By Act Three, the film is basically a cat-and-mouse chase and fight spectacle. 6.5/10 stars.