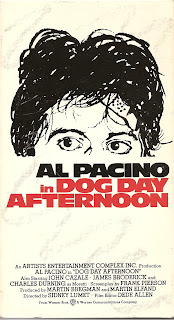 
Blurb From the VHS Jacket: “On a blistering Brooklyn afternoon, two optimistic losers set out to rob a bank. Sonny (Al Pacino), whose frantic brain can race for hours without reaching a conclusion, is the mastermind. Slow-witted Sal (John Casale) is the follower. And disaster is the result.”


What Did I Learn?: In the early 1970s, even much of New York's gay community thought same-sex marriage was a strange idea.


Really?: I realize this movie was based on a real-life robbery-turned-hostage crisis, so I have to wonder if the real Sonny actually allowed one of the tellers to play-act military drill procedures with his rifle.


Rating: I’ve never particularly liked hostage-taking dramas for the simple reason that they’re usually pretty depressing, and you can see the ending a mile away. There are some strong performances in Dog Day Afternoon (Charles Durning is particularly good as a level-headed cop who tries his best to keep things from spiralling out of control), but it’s a bit too long, and a little dull after awhile. 7/10 stars.