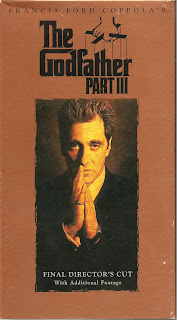 
Synopsis: Michael Corleone is back in action! Watch him host a bunch of lavish parties, be a supportive dad, re-connect with his estranged wife, and, um...save the Pope?


Blurb From the VHS Jacket: “ONE OF THE GREATEST SAGAS IN MOVIE HISTORY continues!”


What Did I Learn?: You obviously can’t trap lightning in a bottle for 16 years.


You Might Like This Movie If: You’ve always wanted to see Al Pacino in a terrible gangster film from 1990.


Really?: 1) Is it easy to stab somebody with a pair of eyeglasses? 2) How does Andy Garcia “become” the new Don if the Corleones have been pretty much out of organized crime for the past decade or so? What sort of organization or power base does he inherit? 3) So wait...Andy Garcia (who looks nothing like James Caan, by the way) lusts for Sofia Coppola over Bridget Fonda...and she’s his first cousin??! No. Way.


Rating: The Godfather Part III is far from being the worst film ever made, but it’s a Godfather movie, which means people had high expectations. What’s wrong with this movie? Where does one begin...Sofia Coppola’s terrible acting is just the tip of the iceberg. The movie is set in 1979, but unlike the previous films, it doesn’t look or feel much like a period piece. Instead, Part III struck me as a series of gala events strung together. And while the previous films examine the gradual corruption of Michael Corleone’s soul, in Part III, he’s basically an all-American dad, and Andy Garcia is portrayed as a “good guy” gangster who wants to save the old neighbourhood from drugs and street crime. Sorry, but I ain’t buying it.  5/10 stars.