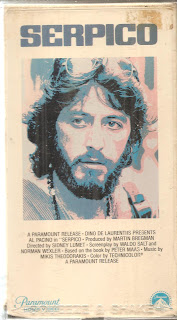 
Salute to Bad Cops Movie #1 (Truth be told, Frank Serpico was actually a very good cop, but the NYC Police Department was pretty dirty in the early 1970s)


Blurb From the VHS Jacket: “Al Pacino’s classic portrayal of Frank Serpico established him as one of today’s most versatile actors. ‘SERPICO’ was based on the true story of a New York policeman who discovers that honesty is not expected to be part of his job. He endures scorn and mistreatment from his fellow cops while attempting to perform his job with integrity.”


What Did I Learn?: Nobody wants to hear your sob stories.


You Might Like This Movie If: You want to know how much progress we've made in that War on Drugs.


Really?: Wouldn’t Serpy’s girlfriend have known that introducing him to friends as a cop was a major uncool? Couldn’t she have said: “he works for the city”?


Rating: Serpico is a fascinating story of police corruption. While the movie looks and feels like a time capsule from a bygone era, it's actually a timeless story. 8/10 stars.
http://www.imdb.com/title/tt0070666/