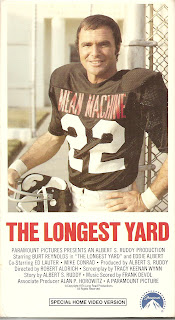 
Blurb From the VHS Jacket: “In this rough-and-tumble yarn, actually filmed on-location at the Georgia State Prison, the cons are the heroes and the guards are the heavies. Eddie Albert is the sadistic warden who’ll gladly make any sacrifice to push his guards’ semi-pro football team to a national championship. Reynolds plays one time pro quarterback Paul Crewe, now behind bars for leading State Police on a wild chase in a ‘borrowed’ car.”


What Did I Learn?: Using a syringe to inject flammable liquid into a light bulb is an ingenious way of killing somebody. Thanks for the advice, Burt!


You Might Like This Movie If: You can’t get enough of Burt Reynolds um... “playing it cool.”


Really?: 1) So wait – the head guard beats up Burt and orders him to refuse the Warden’s offer to assist with the football team. Burt does as he’s told, and the head guard beats him senseless afterwards, anyway? WTF? 2) A once-famous, former pro-football player goes to jail, and nobody makes a move on him in the shower? 2)The only reason the Warden asks Burt to put together a football team of convicts is to provide the guard team with a “tune-up” game. Considering most of the inmates join the team in order to inflict as much punishment on the guards as possible (one guard even gets his neck broken!), I was expecting a clash of visions to emerge, and it never did.


Rating: More a prison story than a football movie, The Longest Yard is enjoyable fare as long you don’t ask too many questions about the plot. It’s also a little tough to sympathize with Paul Crewe after he: a) smacks around his (admittedly snooty) girlfriend, b) steals and trashes her car after a high-speed chase, and c) beats up a couple of cops. 6.5/10 stars.