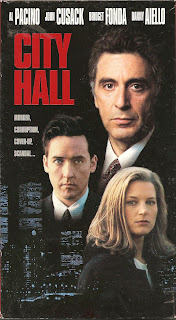 
Blurb From the VHS Jacket: “Veteran politician Mayor John Pappas (AL PACINO) and idealist Deputy Mayor Kevin Calhoun (JOHN CUSACK) are masters at the art of compromise, back room politics and brokering the deals that keep the city running like clockwork. They thought nothing could stop the power machine they so carefully built.”


What Did I Learn?: If you want to make a doctored probation report look authentic, get the dude’s officer to sign it, not the top guy in the department.


You Might Like This Movie If: You enjoy watching a strong, decisive Mayor in action, making a difference for ordinary people.


Really?: 1) Bridget Fonda’s character wants a witness to accompany her as she meets a drug dealer to hear his side of the story. Who does she bring? The Deputy Mayor – and they don’t even know each other that well!  2) In the first half of the movie, we discover that Cusack’s Deputy Mayor is so busy he basically doesn’t have a social life. In the second half, he apparently has enough free time to allow for late-night meetings, trips to Buffalo to meet with exiled probation officers, and other sleuthing activities.


Rating: City Hall is an enjoyable drama with a number of strong performances (Danny Aiello is quite good as a mobbed-up ward boss who only wants to enjoy a good Rogers and Hammerstein musical), although the storyline tends to meander, and Bridget Fonda doesn’t have that much of a part. 7.5/10 stars.