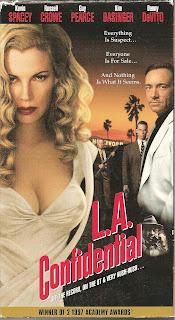 
What Did I Learn?: If you’re hated by your fellow police officers as a no-good snitch, the best way to regain their respect is to blast a few suspects with an Ithaca Model 37 shotgun.


Really?: I realize Kevin Spacey’s character gets a case of the guilts, but come on...why would he leave a perfectly good $50 bill behind as a bar tip?


Rating: LA Confidential drags in places, none of the characters are terribly likeable (although Guy Pearce provides a complex performance as Ed Exley, an ambitious, backstabbing cop who nevertheless believes in justice), and it loses something after DeVito's character departs, but it’s a well-written, and deeply engrossing film. 9/10 stars.