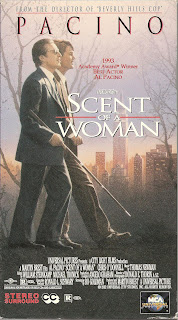 
Blurb From the VHS Jacket: “Al Pacino delivers the performance of a lifetime in this heart-wrenching and heart-warming film from Oscar nominated producer/director Martin Best.”


What Did I Learn?: A bombastic, profanity-laden speech from an authority figure will get you off the hook every time.


Really?: I like this movie – I really do – but its plot revolves around Charlie (Chris O’Donnell) making two rather implausible decisions: a) sticking up for a bunch of guys he doesn’t like, even though he’s in danger of losing his scholarship and getting drummed out of boarding school, and b) accompanying Lt. Col. Slade to New York on the spur of the moment, instead of going home and placing a call to Slade’s niece. Oh, and do the airlines allow former servicemen to carry firearms on domestic flights?


Rating: Scent of a Woman is a little tough to believe in places, but it’s a nice movie, and Pacino richly deserved his Oscar. 8/10 stars.