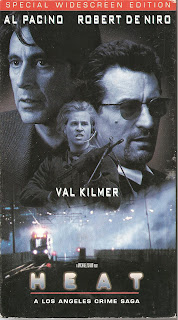 
Synopsis: Aging 1970s-era acting legends fire assault rifles, beat up tougher opponents and bang much-younger women in order to show the kids they still got it.


Blurb From the VHS Jacket: “When Al Pacino and Robert De Niro square off, Heat sizzles.”


What Did I Learn?: If the police are looking for you, and you’re about to make a clean get-away with both the money and a cute girl, don’t make a pit stop for revenge.


You Might Like This Movie If: You’ve always wanted to see Al Pacino and Robert De Niro shoot the shit over coffee...or ice cream.


Really?: 1) What was the point of making Waingro a prostitute-murdering serial killer in his spare time? He’s a slimeball – we get it. The movie’s already too long. 2) If you know the cops have been tailing you, and a detective asks you to join him for a coffee, are you really going to admit to his that pull off robbery scores, and threaten to kill him if he gets in your way? How did De Niro know Pacino wasn’t wearing a wire?


Rating: Heat is an enjoyable popcorn-movie action thriller, and it does contain some good performances (Pacino wildly over-acts in places, however) but I have a couple of complaints: a) at 170 minutes, it’s far too long, and b) none of the characters are terribly likeable or sympathetic. The film has plenty of action and slick moves, but it’s tough to care about any of these people by the end. 7.5/10 stars.