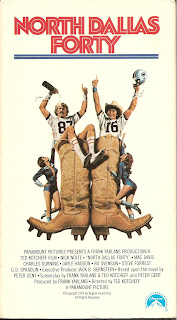 
Blurb From the VHS Jacket: “Nick Nolte stars in this brutally honest entertainment about one man’s rebellion against the bureaucratic, manipulative world of professional football. Based on the popular novel by former Dallas Cowboy Peter Gent, NORTH DALLAS FORTY depicts Nolte as an aging ballplayer who, through a woman he meets, is drawn away from the masculine, violent world in which he has lived so long. In doing so, he finds himself at odds with the team’s management.”


What Did I Learn?: People must have really liked brown couches back in the late 1970s.


You Might Like This Movie If: You’ve always wanted to see Nick Nolte as a broken-down, troubled shell of a man who injects himself with a shitload of drugs. (Oh wait...)


Really?: Would any pro-football team practice its plays (including tackles!) on a basketball court with a hard-wood floor? Did the Dallas Cowboys actually do that?


Rating: North Dallas Forty is a very good, character-driven film. While most of it deals with Nolte’s budding romance with Charlotte (Dayle Haddon) the more interesting relationship is the one between Nolte and his best buddy, the team’s quarterback (Mac Davis). Both are cynical and damaged, but Davis is far better at telling the owners what they want to hear. Take a guess how it eventually ends.  9/10 stars.