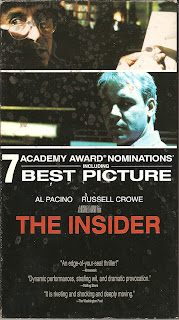 
Blurb From the VHS Jacket: “The Insider recounts the chain of events that pitted an ordinary man against the tobacco industry, and dragged two people into the fight of their lives.”


What Did I Learn?: Hezbollah is a bunch of pussies.


You Might Like This Movie If: You want to see Mike Wallace and 60 Minutes take on those evil tobacco companies. (Funny how they never mentioned this in the film...)


Really?: Do tobacco companies have anything better to do with their time and money than harass former employees? (Imagine my surprise when I learned the FBI investigated the death threats to Jeffrey Wigand’s family and concluded – based on interviews with his ex-wife – that he probably faked them).


Rating: The Insider seems a bit like two movies in one. When the action focuses on Russell Crowe (Jeffrey Wigand), it’s dull and depressing...quite often, he drives home and finds the tobacco company did something truly dastardly, and he gets mad. In the second hour, however, the action shifts to Pacino as the veteran newsman, and things become much more interesting. 7.5/10 stars.