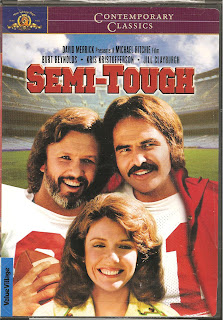 I’m not a sports fan, but the Superbowl is fast approaching, so I thought you might enjoy a few reviews of football-related movies. The gridiron theme will continue until we get to Any Given Sunday, at which point Schuster at the Movies will segue into an Al Pacino theme. (And from there, my blog will segue into a Salute to Bad Cops theme once we reach Serpico).


Football Movie #1 (By the way: that is a blue Value Village sticker in the bottom left corner of the image)


Synopsis: Cynical and moustachioed knucklehead competes with sensitive and bearded knucklehead for affections of mixed-up lady...oh, and they play in the Superbowl, too.


Blurb From the DVD Jacket: “Sexy Barbara Jane (Jill Clayburgh) and wayward football players Billy Clyde (Burt Reynolds) and Shake (Kris Kristofferson) have been best friends for years. But when Shake finds enlightenment with a wacky philosophy called ‘IT’, Barbara Jane finds herself falling in love with his new confidence.”


What Did I Learn?: According to Burt, “big girls have big feelings.”


You Might Like This Movie If: You want to learn how to use flattery and a bit of amoral, existentialist philosophy to defuse tense situations.


Really?: Would an entire pro-football team really take the time to go through a wedding rehearsal the day before the fucking SUPERBOWL? I don’t think so.


Rating: Semi-Tough is a comedy about football players, yet the sport is pretty much incidental to the plot, which instead focuses mostly on the love triangle between Clayburgh, Kristofferson and Burt. The movie boasts an impressive supporting cast (including Magnum PI’s Roger E. Mosley, Carl Weathers, Bert Convy as a slimy self-help guru, Brian Dennehy and the great Robert Preston), as well as some amusing pot-shots at the 1970s encounter group craze, but it’s not that funny, and the ending needed a re-write. 6.5/10 stars.