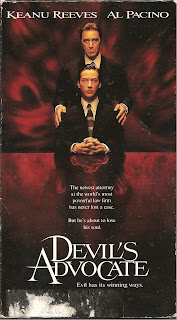 
Synopsis: Old Scratch decides he needs yet another lawyer on his payroll.


Blurb From the VHS Jacket: “Hotshot attorney Kevin Lomax’s 64-0 case record has brought him a tempting offer from an elite New York firm. But the job Lomax accepts isn’t what it seems. The Devil is in the details.”


What Did I Learn?: Satan rides the subway.


You Might Like This Movie If: You want to see a charming guy named Milton defend the idea of greed.


Rating: Pacino is great, Keanu Reeves is...Keanu Reeves (I’m not a huge fan), and Devil’s Advocate is a fun and engrossing film with a few flaws – the largest being an overly long Act Two. Kevin’s wife quickly descends into madness, and instead of realizing there’s something seriously wrong (the soon-to-be-murdered business partner reveals Kevin’s name has mysteriously been on the company charter for decades, but does he actually investigate? Noooooooooo....), he plunges headfirst into his job and doesn’t figure things out until the last ten minutes when everything is revealed, anyway. 7/10 stars.