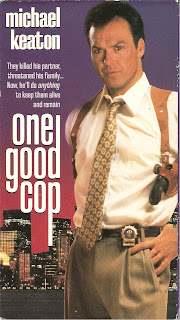 Salute to Bad Cops Movie #6 (Well, Michael Keaton isn’t so much a bad cop as he’s a good cop who’s forced to rip off a drug dealer in order to make some fast cash)


Synopsis: Michael Keaton plays the only NYC detective who isn’t on the take.


Blurb From the VHS Jacket: “Michael Keaton (Batman) delivers a critically acclaimed performance as Artie Lewis, an honest and dedicated police detective in this suspenseful, action-filled movie. Keaton becomes the legal guardian of three orphaned girls when his partner (Anthony LaPaglia, Betsy’s Wedding) is killed in a drug raid. During his investigation of the vicious drug ring responsible, Keaton finds his life – and that of his family – on the line!”


What Did I Learn?: If you’re thinking of robbing the local drug kingpin at gunpoint, you might not want to throw a crumpled-up $20 bill in his face, just the way he did to you a few days earlier.


You Might Like This Movie If: You want to see an honest police officer solve his money problems with a little luck...


Really?: It’s no wonder Tim Burton cast Michael Keaton as Batman, as it becomes apparent he can beat up anybody – even when he gets double-teamed by street thugs.


Rating: One Good Cop isn’t a terrible film, but it unsuccessfully tries to be both a warm-hearted family drama and a gritty, action-packed thriller. Oh – and I didn’t buy the sugar-coated ending, either. 6.5/10 stars.