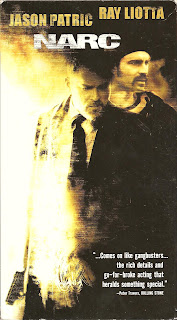 
Synopsis: It’s 105 minutes of greasy cops harassing junkies in the dead of winter.


Blurb From the VHS Jacket: “Jason Patric stars as Nick Tellis, a suspended narcotics officer recruited to investigate the murder of Michael Calvess, a rookie cop killed under mysterious circumstances. Tellis is teamed with Calvess’s partner, Henry Oak (Ray Liotta), a hot-tempered renegade who’ll stop at nothing to avenge his friend’s death. As Tellis and Oak follow a shadowy trail through the seamy drug underworld, the lines start to blur – between right and wrong, good and evil, and justice and revenge.”


What Did I Learn?: If you’re dealing drugs, don’t buy an expensive TV set. The cops will take great delight in smashing it when they “toss” your place.


Really?: Why does Oak wear a suit and tie all the time? Who is he trying to impress...the drug dealers?


Rating: Narc is gritty with a capital G. It’s an unpleasant film with a lot of graphic violence, but Patric and Liotta deliver powerful, top-notch performances as emotionally-damaged cops who have been on the streets a bit too long, and the story is engaging. (The film was also partially shot in Toronto, and if you’ve ever been to City Hall, you’ll recognize a certain stairwell) Narc is an example of low-budget filmmaking at its best. 8.5/10 stars.