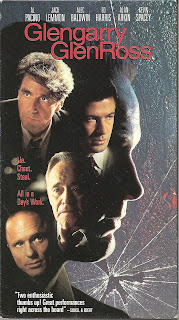 
Synopsis: Foul-mouthed version of Death of a Salesman.


Blurb From the VHS Jacket: “Times are tough at Premiere Properties. Shelly ‘the machine’ Levene (Jack Lemmon) and Dave Moss (Ed Harris) are veteran salesmen, but only Ricky Roma (Al Pacino) is on a hot streak. The new Glengarry leads could turn everything around, but the front office is holding them back until these ‘losers’ prove themselves.”


What Did I Learn?: Unless you don’t mind being continually harassed by slimy, dishonest boiler-room salesmen, don’t ever fill out a corporate survey, or ask for more information on buying land.


Really?: As much as I love Alec Baldwin’s “coffee is for closers” speech, I had a hard time believing that middle-aged salesmen would willingly subject themselves to his abuse. If they weren’t meeting their sales quotas, I also strongly suspect that Mitch and Murray would simply replace them with some high-powered young punks.