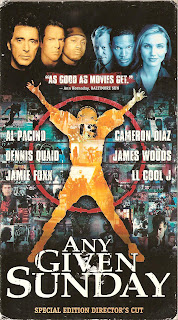 
Synopsis: Pro football is a sleazy enterprise that’s run by greedy owners who: a) chew up and spit out their players and coaches, and b) don’t give a crap about the cities that host their teams...GO SHARKS!


Blurb From the VHS Jacket: “Life is a contact sport and football is life when three-time Academy Award-winning filmmaker Oliver Stone and a dynamic acting ensemble explore the fortunes of the Miami Sharks in Any Given Sunday.”


You Might Like This Movie If: You’re disgusted by the narcissism of today’s football, and you want to remember a time when the game had some real heroes.


Really?: I realize Oliver Stone didn’t get permission to use real NFL teams and logos, but come on... a team (Dallas Knights) based upon the Knights Templar, complete with a Masonic Eye of Providence symbol? Wouldn’t that creep out the locals?


Rating: Any Given Sunday is an entertaining, yet rather run-of-the-mill football film. AGS contains plenty of good performances (still, Oliver Stone’s critics have a point about his inability to write believable female roles...nearly every woman in this movie is some combination of materialistic and catty) but it suffers the same basic problem as The Program: we know that pro-football is all about money, and that it doesn’t treat its players all that well, yet the film somehow expects us to care if Pacino and his money-grubbing gang of toughs win their games or not. (BTW: James Woods, this blog’s favourite unlikeable guy, makes an appearance as...you guessed it: an unlikeable doctor). 7.5/10 stars.