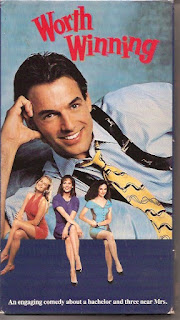 Synopsis: Mark Harmon stars in a pointless, badly-written B-movie….sorry, that’s the Synopsis for Stealing Home. Um… narcissistic Pennsylvania weatherman must grow up if he wants to win the love of a cultured, sophisticated woman….no, that’s Groundhog Day. Charming operator solicits marriage proposals for personal gain….no, that’s Heartbreakers. Creepy weirdo who doesn't have to worry about money throws caution to the wind to pursue the woman of his dreams….no, that’s 10.
Blurb From the VHS Jacket: “An engaging comedy about a bachelor and three near Mrs.”
What Did I Learn?: Poetic justice doesn’t feel so good. 2) A hero should accomplish something. 3) A beautiful woman is one of the loneliest creatures on the face of the Earth. 4) Without suffering, you don’t grow. 5) There wouldn’t be great sex if we didn’t have awful sex.
You Might Like This Movie If: You know that some prizes are worth winning...and some aren't.
Really?: 1) So, Taylor (Harmon) is so good-looking and charming that he can somehow date an attractive woman’s roommate and then manipulate her into apologizing to him for complaining about it? Or somehow get back into Veronica’s (Madeleine Stowe) good graces after a night of bad sex? I don’t think so. 2) At some point mid-way through the movie, Taylor casually asks Ned if he’s given any thought to his plan’s possible impact on other people, and neither of them seem terribly interested in providing an answer. Holy shit, Ned seriously bets his wife’s Picasso that Taylor can’t seduce three difficult women into accepting marriage proposals – and he does this to “help” his old buddy. How are we supposed to sympathize with either of these wackos? This is sick, sociopathic behavior. 3) Just curious: does Taylor still have a job after Veronica dumps him at the altar and he goes into a deep, blue funk for a month? 4) I’m pretty sure Taylor’s proposal to Elinore was just pillow talk, and how can Taylor allow Ned to interfere without scotching the wager? 5) Wow…Andrea Martin doesn’t have much of a part, does she?
Rating: Worth Winning is a lame, unfunny and deservedly-forgotten late-1980s rom com. Even the usually-likeable Harmon can’t bring any life to Worth Winning’s bad script, as his character is incredibly smug and shallow until sometime in the third act. I cannot recommend this movie. 4/10 stars.
Would it Work for a Bad Movie Night?: No, but take a drink any time you think Ned should lose his psychiatric licence. (The worst thing that happens to him is he upsets his wife and must apologize to her).