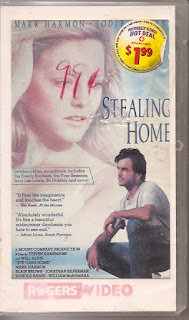 Yes, that is one beat-up clamshell package!
Synopsis: Washed-up ballplayer wallows in nostalgia before he *ahem* dumps his ex-girlfriend one last time.
Blurb From the VHS Jacket: “A story - and stars - to steal your heart.”
What Did I Learn?: Small-town Americans don’t really care if you bang on their front door super-early in the morning.
You Might Like This Movie If: You know that stealing (a) home is no laughing matter.
Really?: 1) I swear: if I ever have to hear this film’s schmaltzy sax-heavy musical score by David Foster again, I’m going to hurt somebody. 2) I’m curious: when do the events of this film actually take place? We’re treated to late 1950s – early 1960s cars and music in the flashback sequences, but Billy suggests he left home 14 years earlier, which would be the mid-1970s. 3) So, let’s see…. Jodie Foster gets second billing on the VHS box, yet she never shares a scene with Harmon and she’s on-screen for maybe 20-30 minutes. 4) Um…why did Katie (Foster) kill herself? We’re told she wasn’t happy in her second marriage, but that’s awfully vague, and the audience never gets a sense from the flashbacks that she’s prone to depression or suicidal tendencies. 5) Holy shit, what a lackluster ending… back to that pointless “you slept with my prom date” bullshit.
Rating: I vaguely remember Stealing Home from the time it aired on the First Choice movie channel back in the very late 1980s, so I picked up a copy more out of curiosity than any other reason. I wish I hadn’t; Stealing Home is meandering, clichéd and confused mess that never goes anywhere, does a terrible job of developing its characters, and swings wildly in tone from bittersweet nostalgic drama to low-key comedy and back again.  I cannot recommend this movie. 3/10 stars.
Would it work for a Bad Movie Night?: No, but take a drink any time the film gets bogged down in a sub-plot that doesn’t advance the story.