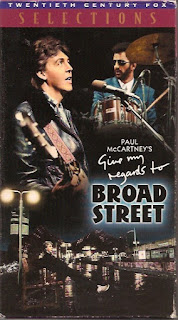 Synopsis: Supremely-compassionate British rocker discovers a valuable master recording of a new album is missing and his company faces a corporate takeover if it isn’t recovered by midnight, so... he spends the day singing songs and daydreaming a bizarre pantomime set in Victorian times.
Blurb From the VHS Jacket: “Screenwriter/star PAUL McCARTNEY creates a rousing musical fantasy about a pop singer/composer (McCartney) who discovers the master tapes of his new unreleased album have disappeared.”
What Did I Learn?: 1) Ringo likes to smoke weed and hit on chicks. 2) Paul apparently regards speed limits as mere suggestions, and possesses an uncanny ability to track down missing people. 3) Paul has been off for years.
You Might Like This Movie If: You need a reminder that Paul McCartney is a great judge of character.
Really?: 1) Holy shit, what was the point of that whole Victorian-era daydream sequence? [Spoiler Alert! Spoiler Alert!] 2) So, on a whim, Paul decides to check out the Broad Street subway station, and he finds the tape box just sitting on a nearby bench? Nobody even touched it in all the time after Harry placed it there when he needed to take a pee?  3) Let me see…. Paul’s buddy accidentally side-swipes Big Bob’s pickup truck as he’s driving the zillionaire star to the recording studio, and Paul neglects to inform Big Bob when he speaks to him, let alone offer to pay for the damages? What a pal…
Rating: Give My Regards to Broad Street can best be described as a self-indulgent ego trip by Paul McCartney. The film includes a lot of great music and some very high production values (which is why I’m giving it a few stars), but it’s far too long to work as merely a collection of music videos. The biggest problem I have with this film – aside from McCartney’s noticeable lack of acting skills – is that there’s no story, and none of the characters are ever developed, so talented performers like Brown, Tracey Ullman, and Barbara Bach are given nothing to do. The non-musical scenes basically consist of everyone giving Paul a hard time for hiring ex-con Harry, and Paul smugly replying that they’re wrong and there’s nothing to worry about. I cannot recommend this movie. 3/10 stars.

Would it Work For a Bad Movie Night?: Sure - take a drink anytime you find yourself asking: "when exactly is Paul going to do something to find Harry?"