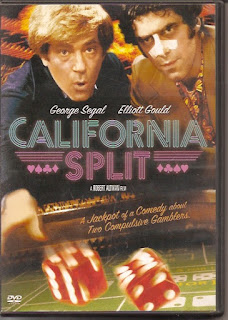 Gambling Addiction Movie #4 (Dang - I meant to post this review last month!)
Synopsis: Elliott Gould stars as one-half of a hell-raising duo in a Robert Altman….no, that’s the Synopsis for M*A*S*H. Um…George Segal is a likeable, middle-class dude who has fallen on hard times and really needs to get some dough. Nope, that’s Fun with Dick and Jane. Um… two guys meet, gamble, and wind up deeply in debt…no, that’s The Music of Chance.
Blurb From the DVD Jacket: “A jackpot of a comedy about two compulsive gamblers.”
What Did I Learn?: 1) You don’t throw oranges on an escalator! 2) Dumbo flew. 3) Everybody’s named Barbara. 4) The tongue of a great blue whale weighs more than a full-grown African elephant (ok, this last one is probably bullshit).
You Might Like This Movie If: You really don't want to gamble with a California split.
Really?: 1) So, Charlie (Gould) is somehow able to hustle a bunch of much-younger kids on the basketball court even though he drinks like a fish and looks completely out of shape? 2) Does Bill (Segal) work with the world’s dumbest bookie? How can Sparkie continue to front him money when it’s painfully obvious Bill is too irresponsible to pay him back? And what are the consequences for failing to repay? Bill never seems terribly worried about getting his legs broken.
Rating: I’ve always had mixed feelings about Robert Altman’s work as a director, but he certainly hit the right notes with California Split. The film itself is funny and presents an easy-going charm even when it provides a warning to the audience about the dangers of compulsive gambling. Segal and Gould share a noticeable chemistry and manage to elevate a good script into a classic character-driven comedy drama. Highly recommended. 10/10 stars.