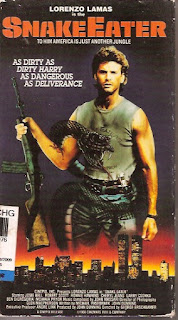 Dang – I could have used this film, as well as Snake Eater III for my Terrible Biker Movie theme last month!
Synopsis: Just imagine Stone Cold meets First Blood, except Rambo ices the inbred hillbillies from Deliverance instead of sheriff’s deputies and Lorenzo Lamas doesn’t have Stallone’s acting range.
Blurb From the VHS Jacket: "AS DIRTY AS DIRTY HARRY AS DANGEROUS AS DELIVERANCE"
What Did I Learn?: Rural America is teeming with murderous, psychopathic martial arts experts, good ole boys, and tooth-collecting bikers, and the place is best avoided altogether.
You Might Like This Movie If: You really want to see Lorenzo Lamas ice a bunch of violent idiots.
Really?: 1) See: “What Did I Learn?” Holy cow…where do I begin with this movie? I could deconstruct dozens of head-scratching moments, but maybe I’ll ask a few questions….2) who are these incest-loving yokels, and why do they feel the need to brutally murder outsiders? This is never explained. 3) Why does this movie end with an extremely anti-climactic sequence of Soldier (Lamas) catching a would-be arsonist (Ron Pallilo, best remembered as Arnold Horshack on Welcome Back Kotter) on a stakeout? 4) Why wouldn’t the hillbillies take “The Kid” (a grown-up and very attractive Josie Bell) back to their hideout, if they’re rape-happy weirdos? 5) How do Soldier’s pants and boots suddenly reappear when the gangsters enter his shithole apartment – and dude isn’t all that angry at Soldier for banging his girlfriend! 6) How much punishment can Soldier take? Assuming he doesn’t have a concussion from getting knocked out by the villains the night before his assault on their compound, he gets his foot caught in a bear trap and even takes a bullet, but he’s still able to engage in hand-to-hand combat.
Rating: Wow… Snake Eater is one of the most atrocious action movies I’ve ever seen. The writing, special effects, stunts, and sets are all God-awful, but the acting is just laughably bad; I mean, the murderous hillbillies reminded me of a Kids in the Hall sketch, while Lamas himself just mugs his way from one implausible fight scene to another. Much like The Room, this film is so bad it’s almost hilarious, so check it out if you’re feeling masochistic. 3/10 stars.
Would it Work for a Bad Movie Night?: Hell yes! Take a drink any time one of Soldier’s wisecracks fall flat.