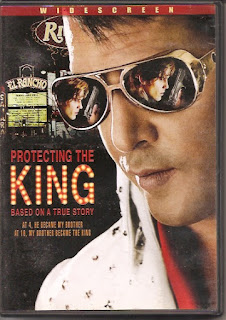 Please click the links to read my reviews of two other Elvis-themed movies: 3000 Miles to Graceland, and Finding Graceland.
Synopsis: Violent, coke-snorting philanderer is paid big money to protect another violent, pill-popping philanderer….who can sing.
Blurb From the DVD Jacket: “Sex, drugs and violence - they’re all part of the job when you’re working for the King of Rock & Roll.”
What Did I Learn?: If you’re ever arrested for statutory rape, your best defence is to immediately leave the state is soon as you’re released because the entire matter will be immediately dropped and forgotten.
You Might Like This Movie If: You know that it isn't easy to be the King of Rock-and-Roll.
Really?: 1) So, where’s Priscilla? Where’s Colonel Tom Parker? Why doesn’t anyone address, or refer to Elvis by name? Why just “the King?” 2) Let’s see….David beats a man senseless, snorts a whole lot of cocaine, gets caught by the police with an under-aged girl in a hotel room and then flees the state (see: “Really?”), and the worst thing that happens to him is that his marriage breaks up? And we’re supposed to feel sorry for him? 3) Wow….David is awfully wise, and strangely attuned to subtle nuances for a 16-year old.
Rating: Protecting the King left me feeling disappointed. Based upon the recollections of Presley’s real-life stepbrother, D. Edward Stanley, the film is strangely devoid of any insights into “the King,” and the the protagonist is far too thick-headed and unlikeable to be terribly sympathetic. I cannot recommend this movie. 4.5/10 stars.
Would it Work for a Bad Movie Night?: I doubt it, but take a drink any time David decides he isn’t going to take any shit from someone and reacts badly.