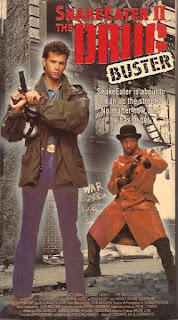 Synopsis: Drug kingpin learns an important lesson the hard way: deliberately killing off your customers by poisoning the cocaine you sell may encourage a homicidal lunatic to exact some payback.
Blurb From the VHS Jacket: “SnakeEater is about to clean up the streets. No matter how dirty he has to get.” [So, wait…is the protagonist nicknamed “Soldier” or “SnakeEater”? And is it “SnakeEater” or “Snake Eater?”]
What Did I Learn?: Apparently, it’s extremely easy to break into and out of a New York hospital for the criminally insane.
You Might Like This Movie If: you've always wanted to find out if "shit stinks." [Just quoting, folks]
Really?: 1) See: “Synopsis” and “What did I Learn?” Seriously, I can understand some low-level street dealer lacing his product with rat poison because he’s super-cheap, but why would the leader of a criminal organization enact such a policy? And why would he keep cartons of the poison in his mansion, conveniently above his sealed-off panic room? 2) Wait, we learned at the end of Snake Eater that Soldier busted Torchy (Ron Pallilo, best remembered as Horshack, from Welcome Back Kotter), yet this fact is never mentioned or touched upon even though the two of them are locked in the same asylum. 3) So, Dr. Pierce (Michelle Scarabelli) clearly likes Soldier enough to help him fool the state’s psychiatric examiner (who we don’t get to meet, even though the examination is billed as a big deal early on), they share some on-screen heat, and then…this budding romance doesn’t get a chance to develop. 4) “Speedboat?” Haha!! 5) Hold on – one of Soldier’s fellow patients is a computer expert who created a virus that wiped out his employer’s major project, and his skills are never once used? 6) It’s strange – except for a couple of minutes near the end when he’s held at gunpoint, Solder never seems to be in any real danger, so there isn’t much tension.
Rating: I have vague recollections of watching Snake Eater II in 1990/91 when my family subscribed to pay-TV, so this film provided a sense of nostalgia when I sat down and saw it again for the first time almost 30 years. I can’t say that Snake Eater II is a great film by any stretch of the imagination, and it certainly suffers from some serious credibility issues (see: “Synopsis,” “What Did I Learn?” and “Really?”), but the film never takes itself too seriously, and it’s better than its predecessor….which isn’t saying much. 5/10 stars.