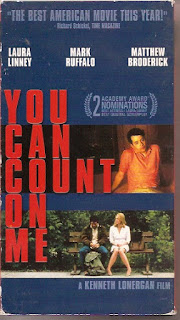 Synopsis: Loveable fuckup bonds with estranged, sexually-frustrated small-town sister and over-protected kid as lots of depressing cello music plays in the background.
Blurb From the VHS Jacket: "But when Terry's behaviour becomes disruptive, Sammy must finally confront the choices of the past... and make new ones as her family faces the future."
What Did I Learn?: “No comment” isn’t a very satisfying response if your son asks if you were a wild kid in your youth.
You Might Like This Movie If: You're fascinated by Upstate New York.
Really?: Overall, this movie is grounded in realism and highly believable, but I didn’t exactly buy the scene where Sammy offers to buy out Terry’s share of the home and he refuses. He hasn’t lived there in ages, he’s always short of money, and it seems like a highly illogical decision.
Rating: You Can Count on Me is an impressive character-driven drama that’s moving and strangely compelling, even though it doesn’t have much of a plot. Instead, this film features strong performances from Laura Linney and Mark Ruffalo (Matthew Broderick, meanwhile, provides some nice comic relief as Sammy’s inept micromanaging boss), some great dialogue, and yes – a bit too much cello music for my taste. Highly recommended. 10/10 stars.