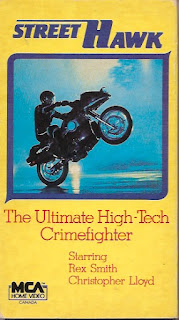 Terrible Biker Movie #4
Synopsis: Tough cop is injured by the guy who murdered his partner, so he seeks justice with the help of a shadowy government-affiliated organization and a futuristic vehicle….oh my God, it’s Knight Rider with only two wheels!!
Blurb From the VHS Jacket: “The Ultimate High-Tech Crimefighter”
What Did I Learn?: Public relations for a major police force is such an easy, demand-free job that one can simply nip out of the office for hours at a time without any fear of getting fired or reprimanded.
You Might Like This Movie If: You really want to re-live the 1980s.
Really?: 1) See: “What Did I Learn?” Speaking of which, it’s funny how Jesse (Rex Smith) is transferred to the police department’s PR department, and he never uses the media to assist in an investigation. 2) So, Jesse’s attractive boss is pissed about him skipping out of the office during business hours, so her solution is to take him out to dinner to break the ice? 3) Wow, it’s a good thing Jesse only takes the Street Hawk out on nearly-empty streets, because I can’t imagine it would be easy to steer, let alone stop when it takes it up to 300 miles per hour! 4) Wait, Jesse has his knee completely fixed, thanks to some cutting-edge secret technology, yet he still has to pretend to be injured and use a cane when he’s at work? That can’t be a realistic long-term strategy. 5) We see that Norman (Joe Reglbuto) has a boss. Who is this guy? Who do he and Norman work for? How are they bankrolling this project?
Rating: It’s strange – Street Hawk looks like the kind of TV show I might have watched, or at least checked out in 1985, yet I have no recollection of it, even after viewing the pilot episode. And I can see why this series never made an impact: the pilot can best be described as unoriginal and formulaic, poorly-written, badly-acted, and loaded with less-than-spectacular special effects (See: “Synopsis,” “What Did I Learn?” and “Really?”) Still, I’ll give it an extra star for an awesome musical score by Tangerine Dream. 4/10 stars.