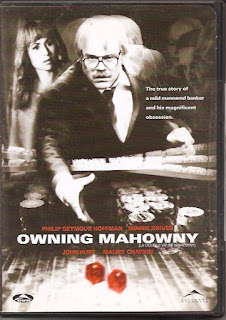 Gambling Addiction Movie #2 (I could have used this for my tribute to movies about Atlantic City a few years ago. Oh, and please click the link to read my reviews of several addiction-themed films)
Synopsis: Surprisingly grubby bank manager develops out-of-the-box solution to finance his hobby.
Blurb From the DVD Jacket: “The true story of a mild mannered banker and his magnificent obsession.”
What Did I Learn?: Top-level bank executives are apparently really, really dumb.
You Might Like This Movie If: You really miss Toronto in the early 1980s.
Really?: 1) Owning Mahowny is based upon a true story, so I’m going to tread lightly in this section. 1) See: What Did I Learn?” More specifically, I had a hard time believing Mahowny and his bosses could sit down with the Selkirks to change the terms of the agreement when each party has a wildly different understanding of the money that had been borrowed, and nobody ever mentions a dollar amount. 2) See: “Synopsis.” Come on, could such an unkempt, badly dressed guy who drives a crappy old clunker car really be taken seriously by senior managers at a stuffy bank? 3)  Ok, Victor Foss (John Hurt) is an oily, and completely insincere casino boss – I get that, but capriciously firing Bernie twice just struck me as over-the-top.
Rating: Owning Mahowny is a surprisingly compelling biopic, especially considering that aside from his obvious addiction to gambling, we learn next to nothing about the motivations of the title character. Ordinarily, I would give this film seven or eight stars, but I loved its authentic depiction of Toronto in the early 1980s, and I’ll admit that I howled with laughter when one of the characters mentioned treating Mahowny and his girlfriend to dinner at Swiss Chalet. 9/10 stars.