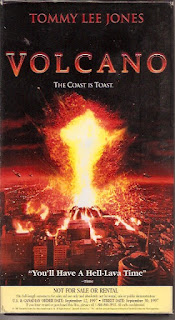 Synopsis: It’s basically Earthquake…with lava!
Blurb From the VHS Jacket: "The Coast is Toast."
What Did I Learn?: Kelly Roark’s dad (Tommy Lee Jones) beats lava. 2) Hieronymus Bosch is heavy because he dealt with man’s inclination towards sin, in defiance of God’s will. 3) Eighty concrete guard rails will NOT stop the flow of lava down Wilshire Boulevard!
You Might Like This Movie If: You've always wondered what might happen if you step on molten lava.
Really?: The entire premise of this film involves heroic attempts to direct the flow of lava through downtown Los Angeles, so I’m going to cut Volcano a bit of slack in this section. Still…. 1) Roark doesn’t understand the meaning of the word “magma?” 2) I had a bit of trouble believing these people could get that close to flowing lava, or that helicopters could fly when there’s so much volcanic ash in the air. 3) Wow….everyone is so heroic and self-sacrificing! I’m pretty sure that I was attempting to carry an injured employee off a stalled subway car and the soles of my shoes were starting to melt, I would drop the excess weight and start running, lickity-split. 4) Holy shit, Roark’s daughter is whiny and irritating…. 5) Wait, how do they know there aren’t other fissures around Los Angeles that will release even more lava? Why does everyone believe the crisis has been averted?
Rating: As the Synopsis suggests, Volcano is essentially a 1990s reimagining of a cheesy 1970s disaster film. Jones does his best with the material (Anne Heche’s character, on the other hand, is a little too snippy to be terribly likeable), but the film’s special effects aren’t top-notch, and there isn’t much plot or character development. I cannot recommend this movie. 4.5/10 stars.
https://www.imdb.com/title/tt0120461/?ref_=nv_sr_1?ref_=nv_sr_1