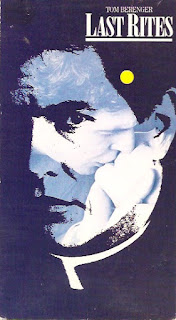 Synopsis: Personable priest protects pretty, powerless, perfidious putana.
Blurb From the VHS Jacket: “A streetwise priest defies the Mafia.” [Oops - I guess I neglected to remove a small yellow dot sticker from the jacket before I used the scanner]
What Did I Learn?: St. Patrick’s Cathedral in New York City is so dreadfully understaffed that it’s apparently extremely easy for a priest to hide an attractive woman inside the building for several days.
You Might Like This Movie If: You'll watch anything that features Daphne Zuniga.
Really?: 1) See: “What Did I Learn?” 2) Last Rites is chock full of plot holes and stunning leaps of logic. I can’t possibly list all of them, but here are a few that stood out: a) it’s not made clear that Michael (Berrenger) is related to Zena and Don Carlo until we’re well into the movie; b) it’s an incredible coinkydink that Angela (Daphne Zuniga) would confess her sins to him without knowing ahead of time that he’s related to the crime family that’s trying to put a bullet in her head; and c) I had trouble believing a priest – even one who knows he has an enemy who wants to kill him – could work with a hit-woman in order to arrange a murder.
Rating: Roger Ebert called Last Rites the worst film of 1988; I wouldn’t go quite that far – I think the film features some nice cinematography, and I liked Berrenger’s earnest portrayal of a flawed priest who tries to do the right thing (on the other hand, Zuniga’s Mexican accent is atrocious – which is strange, considering her father hailed from Guatemala), but the script is so ridiculously contrived and downright unbelievable (see: “What Did I Learn?” and “Really?”) that I simply can’t recommend this movie. 3/10 stars.
Would it Work for a Bad Movie Night?: No, but take a drink any time you’re pretty sure any of these people do something that’s wildly out of character.