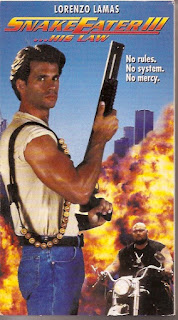 Synopsis: It’s the fight you’ve all been waiting for: Lorenzo Lamas as “Soldier” Kelly takes on “Bam Bam Bigelow”….and they never even exchange a punch.
Blurb From the VHS Jacket: “The SnakeEater gets justice….at whatever cost.”
What Did I Learn?: 1) Outlaw bikers stick out in a small town like balls on a greyhound [I love that line!] 2) Parents, if your young and attractive daughter ever decides to base her Master’s thesis on her observations of living with a motorcycle gang, you might want to put your foot down.
You Might Like This Movie If: You're a Bam Bam Bigelow completist.
Really?: 1) Snake Eater III isn’t meant to be taken too seriously, so maybe I overlook certain questions such as how Soldier managed to get released from the insane asylum, or why he’s still on the police force even though he has a nasty habit of torturing/killing suspects, or why the police force does such a half-assed job of investigating serious crimes, or just how many blows to the head can this guy take, but come on – Bam Bam Bigelow makes a cameo appearance as a villain, and we never get to see him fight anyone? (see: “Synopsis”). Soldier points a shotgun at his head and then shoots him in the foot? 2) Speaking of Bigelow, why couldn’t Soldier simply take him out with a high-powered rifle? Why the elaborate death trap involving urine and electrocution? 3) Wait, we don’t actually meet any members of the motorcycle gang until the movie is almost one-third finished?
Rating: Snake Eater III is a cheesy, occasionally-funny, but completely unnecessary sequel to the low-budget Snake Eater franchise. 4.5/10 stars
Would it Work for a Bad Movie Night?: Hell yes! Take a drink any time Soldier gets into a fight that does nothing to advance the plot.