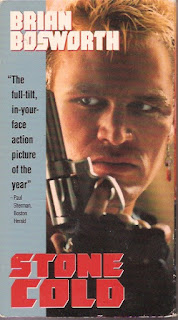 Terrible Biker Movie #2
Synopsis: ‘Roided-up muscle freak infiltrates, and then single-handedly destroys scary cult led by charismatic leader….sorry, that’s the Synopsis for Conan the Barbarian. Um… tough cop goes, deep, deep undercover and winds up getting somebody killed….no, that’s Donnie Brasco. Um… B-list action hero rides a motorcycle and wastes a small army of….no, that’s The Delta Force. Ok, biker gang gets its comeuppance. No, that’s A Bronx Tale and Every Which Way but Loose.
Blurb From the VHS Jacket: “When it comes to non-stop action, STONE COLD is red hot!”
What Did I Learn?: Brian Bosworth looks a lot like a grown-up version of Bam-Bam Rubble.
You Might Like This Movie If: You're looking for new recipes.
Really?: Let’s start from the beginning… 1) Can the FBI really extend a cop’s suspension from three weeks to six months? 2) If Joe has busted more bikers in Alabama than any other police officer, why in the world would the FBI recruit him for a dangerous undercover mission in neighbouring Mississippi? Wouldn’t somebody recognize him? 3) So, why is the Brotherhood murdering religious figures in the first place? And the group hangs Nazi flags and uses Nazi imagery, yet nobody says or does anything particularly racist? Are they neo-Nazis, or is all of this for show? 4a) Hold on – two state troopers are found murdered with a clear death threat against a gubernatorial candidate, and the law enforcement community doesn’t raid the Brotherhood compound, search every inch of it for evidence and beat the crap out of the bikers until somebody talks? 4b) And wouldn’t the FBI immediately ask Joe if he knows anything about these murders, or make them the top priority of the investigation? 5) Wait, the bikers murder a (presumably) made man, yet the local Mafia are entirely willing to negotiate a drug deal with Chains? 6) I’m curious – what did Chains think would happen after he and his buddies took over the Mississippi state house and murdered a bunch of people in a clear act of domestic terrorism? Couldn’t he have simply put a bullet in Whipperton’s head in a dark alleyway? 7) Hmm… the villain aims a gun at the unarmed hero in the final scenes, yet he’s quickly dispatched by the hero’s not-terribly-heroic pal. Didn’t we see that in Die Hard? 8) Nice mullet, Brian.
Rating: Stone Cold is one bad movie. Its script is non-sensical, poorly-developed and clichéd (see: “Really?”), Bosworth has zero acting skills, and the audience isn’t given any reasons to care about any of these characters. I cannot recommend this movie. 3/10 stars.
Would it Work For a Bad Movie Night?: Bad Movie Nights were made for movies like Stone Cold. Take a drink any time Bosworth appears shirtless for no apparent reason or a character is introduced and never developed further.