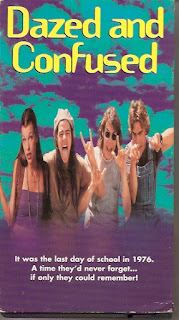 Synopsis: It’s a bit like American Graffiti meets Fast Times at Ridgemont High….except most of the characters are violent, narcissistic, dope-smoking sadists.
Blurb From the VHS Jacket: "It was the last day of school in 1976. A time they'd never forget... if only they could remember!"
What Did I Learn?: 1)The older you do get the more rules they're gonna try to get you to follow. You just gotta keep livin' man. 2) Apparently, George and Martha Washington smoked a lot of dope. Oh, and George was in a cult, and the cult was into aliens. 3) There’s always one senior who has to be the bad ass. 4) When you read about Hemingway and those guys, no one ever talks about who won, just that they got into a brawl. 5) The Fourth of July is a celebration of slave-owning, aristocratic white males who didn’t want to pay their taxes. 6) Dollar bills are green, and they have a lot of spooky shit going on. 7) I’m very glad I didn’t go to high school in Texas during the mid-1970s.
You Might Like This Movie If: You know how it feels to be dazed and confused.
Really?: 1) Holy shit, did high school students seriously subject the graduating Grade 8s to public beatings and other fraternity-style hazing humiliations in mid-1970s Texas? I understand this sort of thing actually took place in some communities (so I’m not calling bullshit on the film), but I’m shocked that nobody was ever seriously hurt, and the town didn’t seem to care. 2) I’m curious: why didn’t the kids simply plan on throwing their end-of-school-year “beer bust” in the woods in the first place? Why the dicey plan to use Pickton’s place, which would have left him with a giant mess to clean up?
Rating: I wasn’t crazy about Richard Linklater’s Dazed and Confused when I first viewed it in the mid-1990s (probably because there isn’t much of a plot to follow, there are a few too many characters and it’s tough to tell some of them apart), but it has grown on me upon subsequent viewings; it’s a funny, and sometimes poignant look back at a familiar, yet profoundly different time in American society. Highly recommended. 9/10 stars.