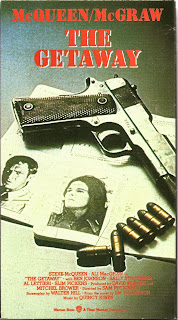 Not Quite a Sam Peckinpah Western...

Synopsis: Career criminal and pistol-packing spouse rob both a bank and a sporting goods store, shoot up a shitload of police cars, and blow away an assortment of thugs... and they’re the only decent people in this movie!

Blurb From the VHS Jacket: “Some men will do anything to get out of prison. And some, like master thief ‘Doc’ McCoy, have their wives do it.”

What Did I Learn?: 1) Switching locker keys with an unsuspecting mark at the train station is the oldest trick in the book. 2) In 1972, cars, firearms and burglary tools were extremely easy to purchase.

Really?: 1) I didn’t know it was possible for human beings to survive an entire night in a filled-up (albeit non-compacting) garbage truck. 2) Wow... Fran’s a real slut. I have to wonder what she figured was going to happen to her marriage to Harold, assuming Rudy let them go after taking them as hostages. 3) So wait... Doc gets mad at Carol for sleeping with Beynon, even though he’s the one who sent her to him, and she managed to get him out of the slammer? What did he think was going to happen? 4) Hold on... I can see Rudy murdering Frank in order to steal his share of the loot, but shooting Frank while operating a moving vehicle? That seems incredibly dangerous.

Rating: The Getaway is pure escapist fun, featuring fine performances from McQueen and McGraw, direction by Peckinpah, a compelling screenplay by Walter Hill (based on Jim Thompson’s novel), and a great musical score from Quincy Jones. My only complaints would be the scenes of Doc (McQueen) roughing up his lady, and of “poor little Harold” being tied up and forced to watch his wife have sex with their captor – they’re difficult to watch. Still, The Getaway is highly recommended, and Star Wars fans may get a kick out of a couple of scenes (McQueen and McGraw in a garbage truck, or McQueen saying: “punch it, baby” when they’re driving) that were obvious influences on a young George Lucas. 9/10 stars.