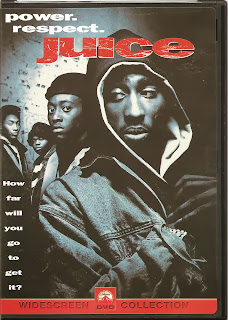 Blurb From the DVD Jacket: “Q. Raheem. Bishop. Steel. They’re four Harlem friends who spend their days hanging out and looking for a way to get the power and respect they call Juice. Q hopes to earn respect by becoming a scratch ‘n’ mix DJ. Bishop has a deadlier plan. He wants to take it through an armed robbery. And he wants his crew to be with him.”

What Did I Learn?:  In the words of one minor character: “Just ‘cause you pour syrup on something doesn’t make it pancakes!”

Really?: 1) So wait... Q is in high school, and his girlfriend is both older, and has a full-time job at the local hospital? Um... yeah, I don’t believe that set-up. 2) Does anyone know why Bishop (Tupac) feels the need to ice his homies? I mean, it’s pretty clear they don’t want a cut of the loot, and there’s no chance they’re going to rat on him to the cops.

Rating: I wanted to like Juice more than I did; Tupac Shakur demonstrates he had some real acting talent, and the movie features some great early-1990s rap from Big Daddy Kane, Eric B. & Rakim, Salt N’ Pepa, and other artists. The biggest problem I had with Juice is that the story feels fabricated, and I didn’t believe its basic premise: these guys have known each other from grade school, and yet Bishop somehow feels the need to kill all of them after a violent robbery. It also loses a lot of dramatic tension after Raheem gets bumped off, and he’s the first to go. [Shit – was that a spoiler? Ok, no more details!] 6/10 stars.