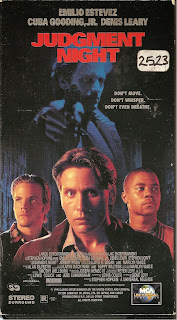 Synopsis: Hilarity ensues after suburban douchebags take a wrong turn in their land-boat.

What Did I Learn?: If you’re stuck on the freeway and tempted to take a shortcut through the city, don’t... just don’t.

You Might Like This Movie If: You feel for these guys, and you know it isn't easy to drive a Winnebago.


Really?: 1) When they’re hiding in the boxcar and attempting to buy the silence of the hobos, couldn’t our heroes have simply given them money instead of handing over their wallets, including credit cards and ID? 2) Do multi-ethnic (or all-white) street gangs exist outside of Hollywood movies? 3) So, hold on... Ray has a gun for most of the first half of the movie, and he reveals it only to threaten his friends? No way... 4) There certainly aren't many payphones in inner-city Chicago, circa 1993, are there?

Rating: Judgement Night is a bit of a guilty pleasure; it’s an enjoyable, compelling action-adventure film that is marred by a contrived storyline (the set-up is fantastic, but it quickly descends into a long cat-and-mouse chase, and our heroes keep making dumb decisions), and some less-than-stellar performances (I'm looking at you, Cuba Gooding Jr!). Judgement Night is possibly the least realistic of the Urban Crime films I have reviewed so far, but it's easy to relate to it if you’ve ever driven down the wrong street in Detroit and wound up in the bad part of town. Check it out for laughs and thrills – and to see Denis Leary at the top of his game. 7/10 stars.