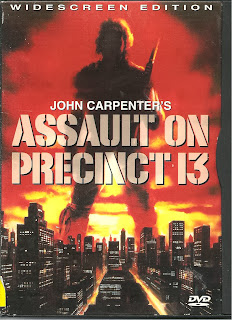 Synopsis: Um... it’s basically Night of the Living Dead, except the zombies have automatic weapons.

Blurb From the DVD Jacket: “Isolated, cut off. Inside an abandoned police station, a handful of cops and some convicts on their way to Death Row must join forces and defend themselves against the gang called Street Thunder, who have taken a blood oath to destroy.”

What Did I Learn?: If a street gang invades your workplace, you should immediately run to the basement. Oh, and if you decide to detonate an acetylene tank down there, don’t worry – it will only blow up the bad guys.

You Might Like This Movie If: You've always wanted to see a completely unrealistic street gang fight.


Really?: 1) Um... do multi-ethnic street gangs exist outside of Hollywood movies? And can the average street gang pull off a military-style siege? And is the average gangbanger totally prepared to serve as cannon fodder during such an assault? 2) See “What Did I Learn?” 3) I’m pretty sure that getting shot – even just in the arm – is a debilitating, and trauma-inducing experience. Funny how Leigh continues to kick ass, even after she loses the use of her right arm. 4) Hold on – Napoleon Wilson is on his way to DEATH ROW. I can see him helping out Bishop and Leigh in order to save his own skin, but damn, he sure is cooperative with them. Kinda funny, considering he’s probably going back to the gas chamber when this is all over. 5) So, if Street Thunder is throwing molotov cocktails into the building in order to burn it to the ground, why do they send armed gangbangers inside? That makes no sense...

Rating: Assault on Precinct 13 is considered to be one of John Carpenter’s best films (in some ways, it’s a remake of Rio Bravo), but it left me cold. The storyline is riddled with plot holes and implausible twists, the acting (especially from Austin Stoker and Laurie Zimmer) is terrible, and by the end, I was asking myself: “so what?” I cannot recommend this movie. 4/10 stars.

Would It Work For a Bad Movie Night?: Take a drink any time somebody predicts Bishop is in for a quiet night in the precinct, or when he asserts that help is on the way.