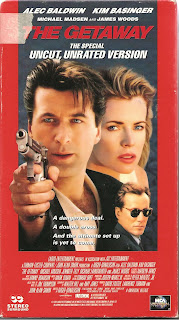 What Did I Learn?: 1) Kim Basinger (or her body double) looks fantastic when topless. 2) Switching locker keys with an unsuspecting mark at the train station is... hey, wait a minute – they reused the same line?!?

You Might Like This Movie If: you know that it isn't the worst film to ever sport the title of "Getaway".
Really?: 1)  I can see Rudy murdering Frank in order to steal his share of the loot, but shooting Frank while operating a moving... hey wait a minute, they kept that scene from the original?! 2) In this version, Doc is sprung from a Mexican jail, and then commits crimes in the US. Would he really want to escape to Mexico?

Rating: As I watched The Getaway, I kept asking myself: why did they make this movie? It’s nearly a scene-for-scene re-enactment of the superior 1972 original. Basinger and Baldwin are both quite good, and it’s not a bad film if you’ve never seen the McQueen-McGraw version, but I have to give Director Roger Donaldson a big, fat “F” for unoriginality. And considering the VHS jacket features a small image of James Woods, couldn’t somebody have figured out a way to include him for more than the first 20-30 minutes or so? 6/10 stars.