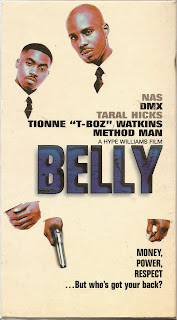 Synopsis: Ever wanted to watch a 95-minute rap video? No, me neither...

Blurb From the VHS Jacket: “Too powerful to be shown in theaters, see why Belly is the most controversial film of the year.” [So...it went straight-to-video? That’s encouraging...]

You Might Like This Movie If: You enjoy the wit and wisdom of DMX.[Go to the 5:45 mark to hear his thoughts on the possibility of a Belly II]

Really?: Oh man...where do I begin? I could ask if it makes sense to include a major character who is completely unintelligible, or to make his elaborate Scarface-style assassination pretty much incidental to the storyline. I could also point out that the ending of Belly is so unresolved that I wanted to throw something at my TV screen. But no – I’ll just say that if I were a New York-based drug dealer, and I just took possession of a shipment of the latest, and trendiest heroin, I don’t think I would pick up and move to Omaha, Nebraska to sell it.

Rating: Belly is all-flash, and no substance. While I concede that Hype Williams made a visually-stunning movie that features some great music, the dialogue is terrible, the “plot” makes almost no sense (the film is a basically a series of strung-together vignettes that only vaguely interconnect), and the characters are all violent, selfish and completely unsympathetic thugs and hangers-on. By the end, Buns and Sincere (DMX and Nas) supposedly experience spiritual awakenings, yet this theme is introduced late into the film and seems unconvincing and tacked-on. I cannot recommend this movie. 2/10 stars.